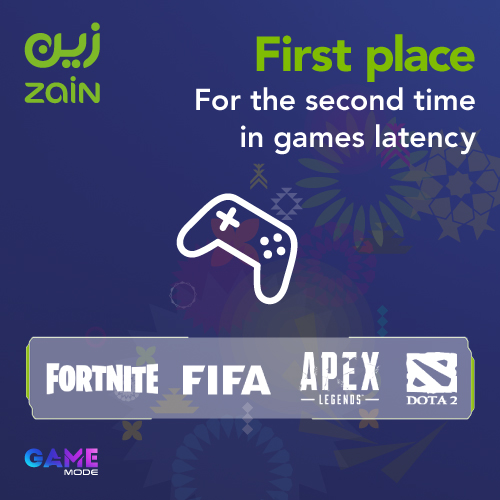 Once again, Zain KSA ranks first in the Game Mode report issued by the Communications and Information Technology Commission (CITC) for the second quarter of 2021, recording top connectivity performance in 4 of the most popular video games in Saudi Arabia, namely Fortnite, FIFA 21, APEX Legends, and Dota 2.

Zain KSA also led as the fastest mobile network response time in Riyadh according to the report. Those results, in addition to numerous local, regional, and global accolades, come to position Zain KSA as the leading provider of home internet bundles in Saudi Arabia, and a premier entity within the telecommunications and information technology sector. Among its noteworthy awards, Zain KSA won the SpeedTest award for the Kingdom’s “fastest fixed network” granted by the global company Ookla for the first quarter of 2021 for the third consecutive time.