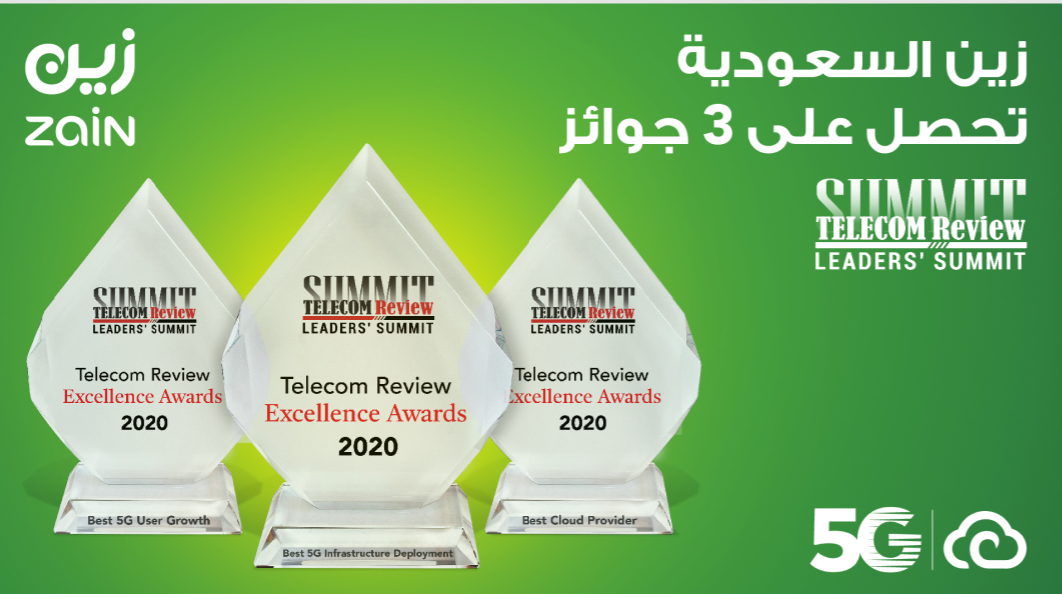 18 November 2020: Zain KSA scored a triple triumph at the Telecom Review Excellence Awards 2020, held at the Meydan Hotel in Dubai. The Telecom Review Leaders’ Summit was held both physically and virtually, and the day ended with an awards ceremony that recognizes industry leaders for their efficient and hard work in 2020, and a special way for Telecom Review to help celebrate the winner's success.
The pioneering telecom provider was recognized in three separate categories for ‘Best 5G User Growth’, ‘Best Cloud Provider’, and ‘Best 5G Infrastructure Deployment’.
Zain KSA proves to be a trailblazer with its 5G roll-out, which commenced in October 2019 by launching the region’s largest 5G network in the Middle East, Europe, and Africa and fourth largest in the world, as it now extends to 50 cities across the country enabled by more than 4600 towers.
The company capitalized on building and maintaining a state-of-the-art 5G network in keeping with the digital requirements of Saudi Arabia’s ambitious transformation plan.
The company was also awarded “Best Cloud Provider” as they have been exploring opportunities that would enable them to utilize its hi-tech capacities to deliver cloud computing services to business users in the Kingdom.
On his part, CEO of Zain KSA, Eng. Sultan Bin AbdulAziz AlDeghaither, said: “The importance of these awards lies in the fact that they reflect the tremendous level of progress the company has made over the course of a year." He added: “Last year, Zain KSA won an award for the "Best Infrastructure for the 5G Network" category, and today it is crowned with three awards from the same entity.”
Commenting on the awards, Toni Eid, CEO of Trace Media and Founder of Telecom Review, said: “The Telecom Review Awards committee received this year from the largest and most innovative ICT companies a record number of nominations that exceeded 300. This shows the high interest of ICT leaders in our awards and their trust in Telecom Review that kept the same standards despite the difficult times we’re witnessing.”
Jeff Seal, Managing Partner of Telecom Review North America said: “The competition for these awards has grown this year with many more nominations than in the past. These awards recognize not only the best of the best in the industry, but also their achievements as individuals.”

Maintaining its profitability and for the first time in its history