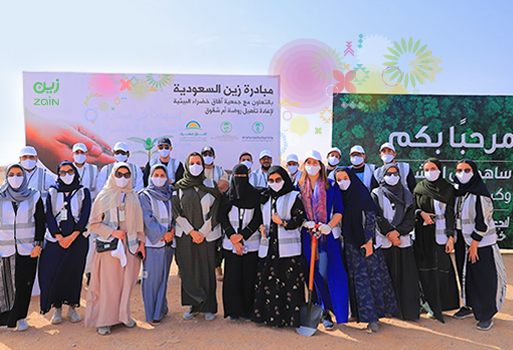 •    The project aims to offset carbon emissions and combat desertification and land degradation.
•    Zain KSA employees took part in the reforestation and rehabilitation of “Um Al Shogog” national park.
•    The campaign contributes to achieving the objectives of the Saudi Green Initiative to increase plant coverage.
In accordance with its corporate sustainability strategy and the Saudi Green Initiative, Zain KSA has announced the reforestation and rehabilitation of “Um Al Shogog” campaign in partnership with the Environmental Green Horizons Society, activating its role in protecting the environment. This initiative confirms Zain KSA’s commitment to contribute to the Saudi Green Initiative, launched by HRH Crown Prince Muhammad bin Salman, First Deputy Prime Minister and Minister of Defense, as one of the largest global initiatives to increase the coverage of vegetation and achieve environmental sustainability.

In their commitment to the campaign, Zain KSA employees collaborated with the local community as well as the Society’s volunteers to plant seedlings and trees across the park, giving it life after decades of soil and vegetation degradation. In addition to creating an attractive environment for outdoor leisure activities, ecotourism, and rich bee pastures, this initiative contributes to increasing the number of volunteering hours spent on restoring the Kingdom’s natural environment, instilling a culture of volunteering and community service among locals.

Commenting on the initiative, Mr. Rayan bin Abdullah Al-Turki, Chief Communication Officer at Zain KSA, stated, “This campaign aligns with Zain's Corporate Sustainability strategy, which rests on 4 pillars that measure our progress and goals: Combating Climate Change, Inclusion, Social Leadership, and Youth Empowerment.” He then added, “At Zain KSA, we are proud that our efforts to tackle climate change are in line with the goals of the Saudi Green Initiative and the Middle East Green Initiative launched by HRH Prince Muhammad bin Salman to chart the direction of the Kingdom and the region towards environmental sustainability and conservation, based on a clear well-defined roadmap with ambitious targets that go a long way in achieving global sustainability goals.”

For his part, the Chairman of the Board of Directors for the Environmental Green Horizons Society, Dr. Abdul Rahman Al-Saghir, thanked Zain KSA for their interest in preserving the environment as demonstrated by their active participation in the restoration campaign of the “Um Al Shogog” park covering an area of 18 million square meters, which demonstrates the importance of developing vegetation cover to limit the effects of climate change, reduce desertification and promote the ecological regeneration that the Kingdom is witnessing.

As part of its environmental initiatives, Zain KSA has recently launched an e-waste recycling campaign. Prior to that, it ranked highest among telecom operators in the Middle East and Africa in the category of tackling climate change on the Carbon Disclosure Project (CDP) global index. Having successfully met the CDP standards and requirements, Zain KSA achieved an advanced rating of Management Scope (B), which is a classification for companies that disclose information on the environmental impact of their initiatives and operations combatting climate change.