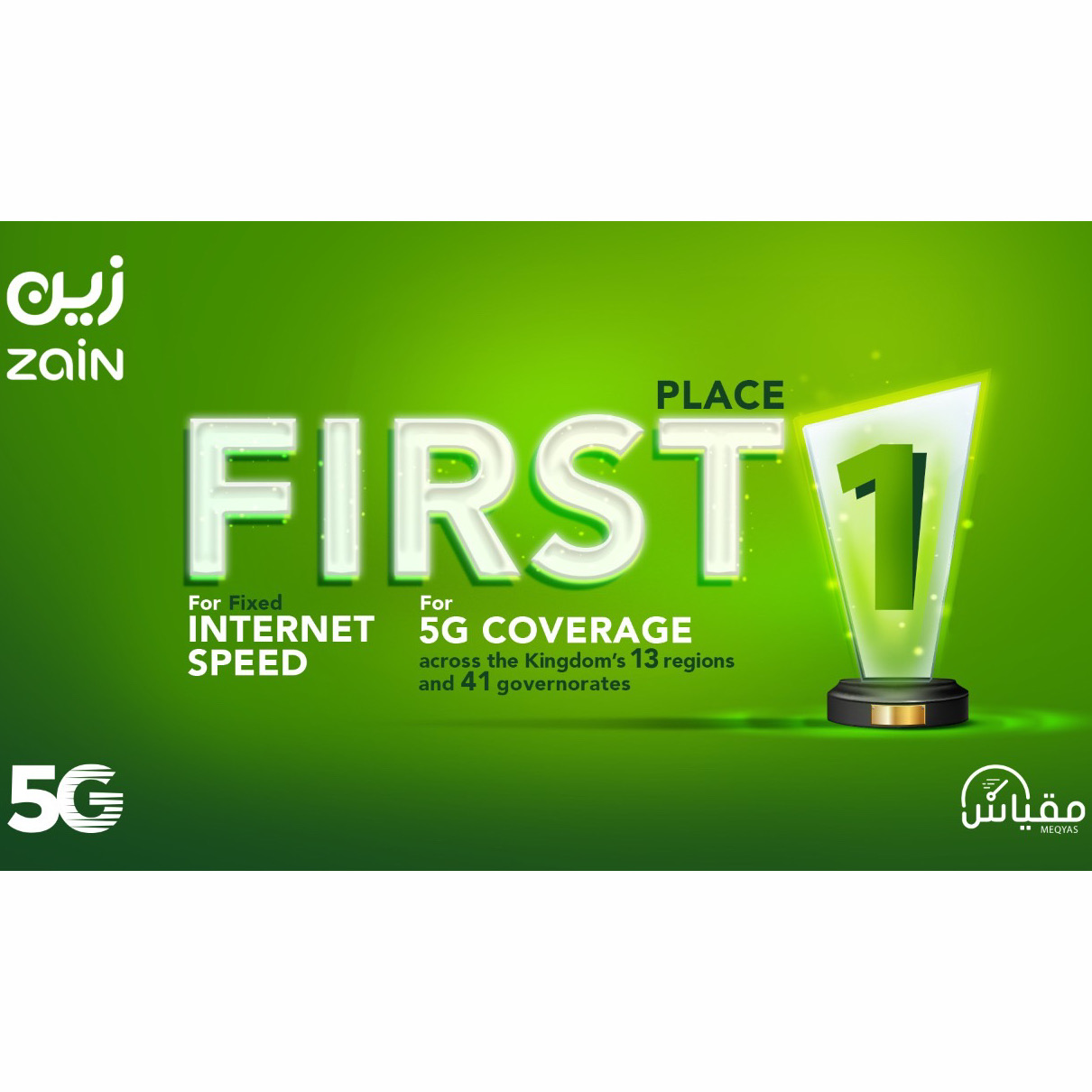 once again seizes top ranks across indicators of “Meqyas” report,

Zain KSA has once more underscored its pioneering position within the Saudi information technology and communications industry by seizing top ranks within the CITC “Meqyas” report for the third quarter of 2020. The report, sheds light on Zain KSA’s outstanding fixed internet speed. Based on the report, Zain KSA held first place in 4 indicators measured including: “Fixed Internet Speed”, “5G deployments across Governorates”, “5G deployment across regions” and “Latency for Most Played Video Games in the Kingdom.”

As per the report, Zain KSA came first within the “Fixed Internet Speed” indicator with average speeds of 110 Mbps. In addition to that, the company has gained international recognition through earning the award for Saudi Arabia’s “fastest fixed Internet” from Ookla, owner of SpeedTest, the globally acclaimed Internet speeds measuring website.

Owing to its quality investments in developing the 5G network, Zain KSA achieved first place in its 5G deployment in various cities of the kingdom with a total coverage of 50 cities enabled by more than 4600 towers. As for the “5G deployment across Governorates” indicator, Zain KSA also attained the first rank among Saudi Arabia’s telecom operators through providing the largest coverage to a total of 41 governorates in the Kingdom, which is 25 governorates more than the second rank. Additionally, Zain KSA also came first within the “Latency for Most Played Video Games in the Kingdom” indicator, by providing the lowest latency in electronic games measured by the report, including: APEX, Fortnite, and DOTA2.

Commenting on these results, CTO at Zain KSA Eng. Abdulrahman bin Hamad AlMufadda said “The remarkable results accomplished by Zain KSA throughout the four indicators of “Meqyas” report strongly reflect the major success of its development and expansion strategy and its role in serving the Kingdom’s society. Which was achieved by strengthening the 5G experience in the Kingdom onto two levels: horizontally, concerned with spreading the 5G network across the largest possible geographical scale, and vertically, by focusing on the specific sectors that the Kingdom has high competitive capabilities in. In addition, the company will continue to invest in the digital sector, cloud computing, IoT, and AI; aiming to become the digital service provider of choice, whether at the level of individuals or businesses.”

AlMufadda continued, “in line with our direction, Zain KSA plans to achieve two national key goals: supporting the Kingdom’s comprehensive digital transformation in line with the goals of Saudi Vision 2030 and accelerating the fourth industrial revolution in the Kingdom, which would lay the foundations for economic diversification, and in turn, raise the Kingdom's economic competitiveness generally and in particular its industrial edge.”

He added “The company’s pioneering ranks within the 4 indicators, notably the “Fixed Internet Speed” indicator provided customers with a groundbreaking digital experience especially during peak usage times witnessed during the coronavirus outbreak this year; which has expanded our client base by attracting new users. As for the geographic coverage of Zain KSA’s 5G network, we have expanded our services rapidly to 50 cities across the Kingdom. We will continue to expand the 5G network as much as possible and elevate the quality of services provided in cities already covered. As per the norm, we will also keep updating our coverage maps on a weekly basis on our website in line with the company’s transparency values aiming to provide everyone with accurate and detailed coverage of our 5G network performance in all cities of the kingdom.”