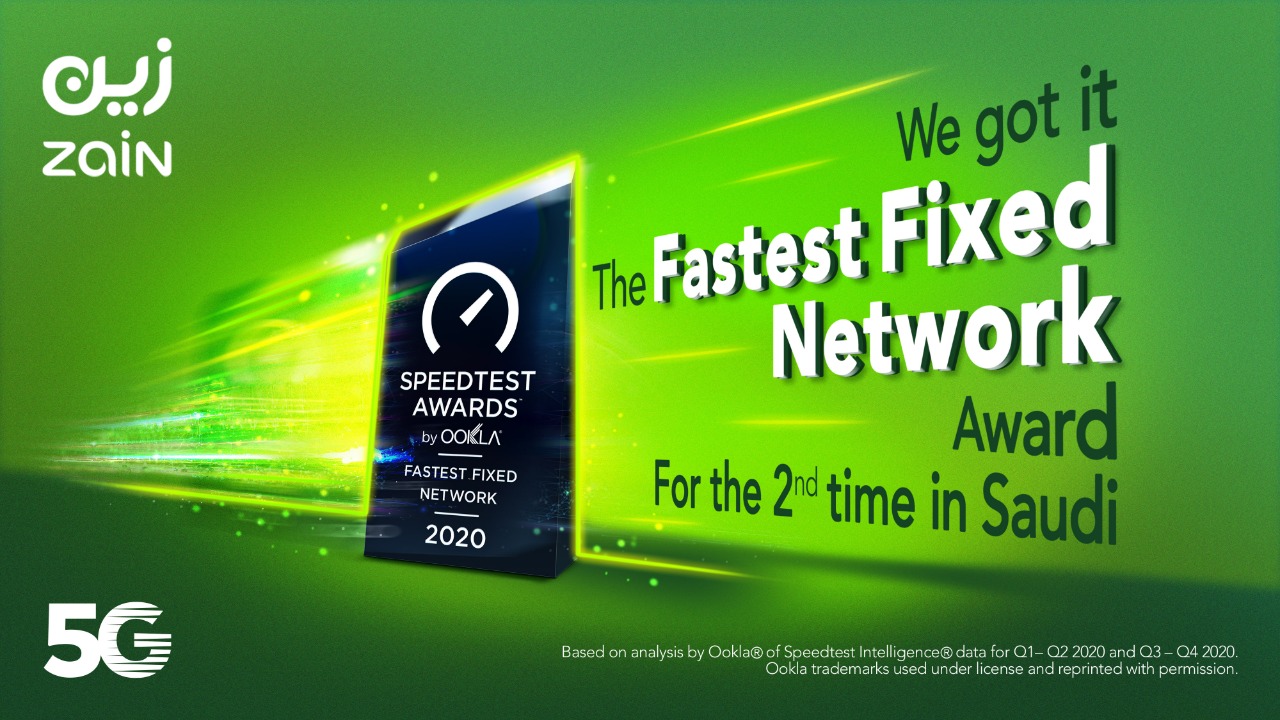 For the second consecutive time

Zain KSA has announced winning the Speedtest award for fastest fixed network in the Kingdom for the second half of 2020. The award, presented by globally acclaimed, Ookla®, tops a series of achievements completed by Zain KSA this year, including bagging the same award during the first half of the year.

The award comes as a result of Zain KSA’s keenness to present the top telecommunications services to residents and citizens of Saudi Arabia, which led to the investments in its 5G network; accomplishing leading positions in service speed, quality, and reach. Zain KSA the pioneering operator now boasts the largest geographical coverage for 5G network, serving 50 cities across the Kingdom enabled by more than +4,700 towers. As the company aspires to provide the best service for everyone in the Kingdom. Where it has made breakthroughs on the regional and global level, where Zain KSA’s advanced 5G network was named the largest in the Middle East, Europe, Africa, and the fourth largest in the world.

On this occasion, CEO at Zain KSA Eng. Sultan bin AbdulAziz AlDeghaither commended the awards stating, “Zain KSA’s global and local recognitions, are a result of diligent efforts throughout the previous period, and by fulfilling its strategic objectives and advancing Saudi Arabia’s internet standards and experiences, thus enhancing the quality of life for citizens and residents alike and supporting the Kingdom’s comprehensive digital transformation plan, in addition to raising the competitiveness of its ICT sector.”

He added: “The most noteworthy strategies in building Zain KSA’s advanced 5G network were: balance and sustainability. The Expansion plan did not compromise on quality or speed, and investments in the infrastructure did not focus merely on the Kingdom’s main cities, but included all regions and areas, thus, when pairing the vast regional expansion with the network’s service quality, the service achieved is sustainable and efficient.”

Alongside the Speedtest award for the fastest fixed network in the Kingdom, Zain KSA won three more awards in 2020 during the Telecom Review Leader’s Summit for the categories: “Best 5G User Growth,” “Best 5G Infrastructure Deployment,” and “Best Cloud Provider.” It also scored top national ranks within the “Meqyas” report published by the Communications and Information Technology Commission for the third quarter of 2020, namely in 4 main indicators including: “Fastest Fixed internet Speeds”, “5G deployments across the Kingdom”, “Number of Governorates covered with 5G” and “Lowest latency for most played video games in the Kingdom.”

Notably, the renowned Speedtest website which specializes in measuring internet speeds worldwide, grants its awards to the world's leading telecom providers after evaluating them using Speed Score™ which measures the networks' download and upload speeds, after comparing millions of user-initiated tests on several platforms, making it the most trusted and credible award.