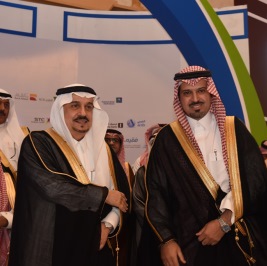 Zain KSA trademark was chosen in the list of top 100 trademarks in the Kingdom, based on a recent survey by a press institution. During an event held for this occasion, Mr. Saleh Hasanain, Director of Corporate Communications, received an award of recognition on behalf of the company from the Minister of Culture and Information, His Excellency Dr. Abdulaziz Khojah, and His Royal Highness Prince Bandar Bin Khaled Alfaisal, Chairman of Asir Press and Publications Association.
This award is part of several regional and international awards won by the Zain trademark since it was first launched. The awards include (Best Brand) which Zain won two years in a row in the Middle East Telecom Awards. In addition to winning the first place awardas the top Arab brand across all sectors, during a referendum put forward by the Arab Society for Intellectual Property (ASIP).
The company revealed that the awards reaped by its brand is a positive indicator of its success in raising brand awareness and strengthening its presence as a leading mobile communication provider in the region, through meeting the needs and aspirations of its subscribers and users of telecommunications services in general.
The selection of the best 100 trademarks in the kingdom was made after extensive research studies that focused on the most prominent trademarks in the Saudi economic sector, in order to support and highlight them as one of the main pillars supporting the Saudi economy. The studies also seek to raise awareness of the importance of branding and offering support to trademarks.